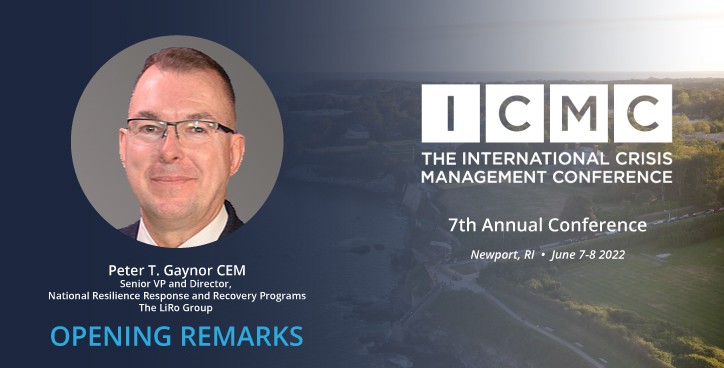 We are proud to announce that Pete T. Gaynor CEM, Senior VP and Director National Resilience, Response and Recovery Programs at the Liro Group and former Secretary of Homeland Security, will deliver the opening remarks of the 7th Annual International Crisis Management Conference in Newport, RI.

On January 11, 2021, Mr. Gaynor was designated as the Acting Secretary of Homeland Security by President Donald J. Trump. Mr. Gaynor was officially confirmed by the U.S. Senate to be FEMA Administrator on January 14, 2020. Previously, he served as the Senate-confirmed Deputy FEMA Administrator. Since his selection by the President, Mr. Gaynor led FEMA’s response to over 300 presidentially declared emergencies and major disasters. Mr. Gaynor oversaw the agency’s close collaboration with federal, state, local, tribal and territorial partners, making it possible to serve millions of Americans in their time of need through locally executed, state managed and federally supported disaster response.

We were lucky to have Peter speak at last year’s virtual conference where he discussed the immense power and critical partnerships of American businesses during the COVID-19 Pandemic.

“I’m excited to support the 7th Annual ICMC Conference coming up in June. I spoke at last year’s virtual conference and I’m excited to attend this year in-person.  A great event in which to sharpen your skills!”